JOHNSTOWN — Two area women are sharing their experiences on the Ukraine border in hopes others will be moved by the plight of refugees fleeing the Russian attack on their homeland.

Laurie Garramone of Johnstown and Cheryl McGrattan of Fonda say their time in a relief kitchen in eastern Poland was at once distressing and uplifting.

The two friends said those fleeing Ukraine are mostly women and children who have no way of knowing when they will be able to return home or what will be left to go home to. Yet they remain proud of their country and want nothing more than to be able to live there safely.

“We watched as family after family walked by us, some with just a shopping bag, which is all they had,” Garramone said. “You could see they didn’t know what the next step was.”

“I saw a woman who was straightening her little boy’s hair before they went into a refugee center and I looked at Laurie and said, ‘How can you parent through this?'” McGrattan said.

Garramone is rector of St. John’s Episcopal Church in Johnstown. McGrattan is vice president of marketing, communications and community relations at Nathan Littauer Hospital in Gloversville. She and her family are members of Garramone’s congregation.

After Russia’s invasion of Ukraine in February, McGrattan did what a number of other Americans have done: Book (and pay for) nights at Ukrainian Airbnb rentals that she knew she’d never actually use, as a way to support people who were losing their livelihoods. 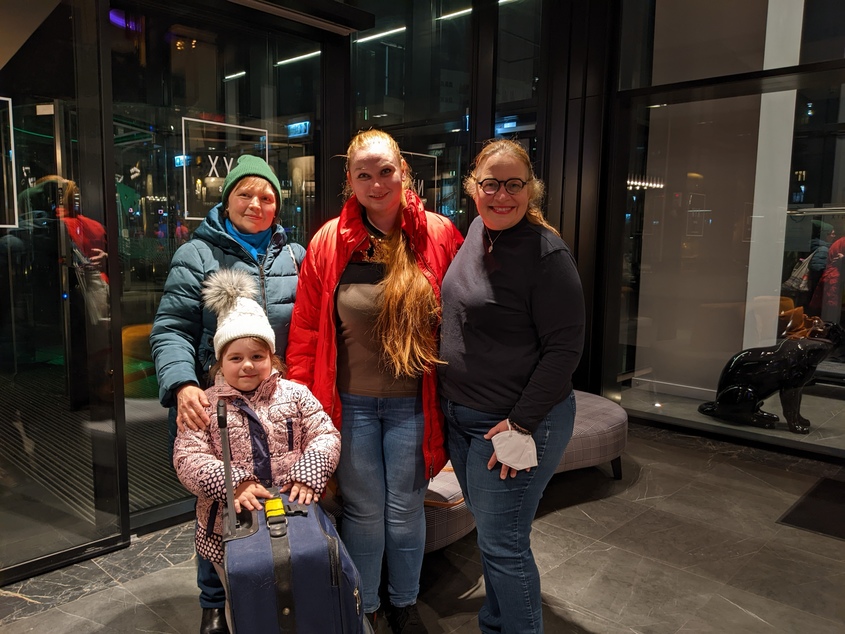 Cheryl McGrattan of Fonda, N.Y., meets Anna (red jacket), a Ukrainian war refugee with whom she had been corresponding. With them are Anna's mother, Alla, and daughter, Viki, holding a suitcase full of donated items. PHOTO PROVIDED

That option ended, but she had already taken other steps, including collecting medical supplies from Nathan Littauer for donation, while Garramone encouraged monetary donations.

“Both Laurie and I were just compelled by what we were seeing on the news,” McGrattan said.

She knew and respected the work of World Central Kitchen, and when it had two volunteer slots open up on very short notice, she asked Garramone if she’d like to go.

The two arrived in Poland, on April 3, with a suitcase full of gifts and supplies for a woman who owned one of the Airbnbs McGrattan had booked. She had fled as bombing drew close to their home and was staying with her mother and daughter in a Warsaw convent with 20 other Ukrainians.

McGrattan had exchanged messages of support with the woman, who she’ll identify only as Anna, and Anna was gratified to meet her.

“My heart is hot,” she told McGrattan in imprecise English over dinner, apparently meaning that the two New Yorkers had warmed her heart by journeying to help. Anna said she didn’t think Americans cared about Ukraine’s plight.

The work began for two volunteers the next day, when they reached the southeast border city of Przemysl, a portal for refugees fleeing Ukraine.

“There was an unbelievable amount of fatigue,” Garramone said.

For 10 to 12 hours a day they were on their feet, making nutrient-rich, calorie-dense meals thousands at a time.

“We made sandwiches and baby food and bread pudding all day long,” McGrattan said. Baby food is the most requested item at the border but sandwiches are a key food in this situation: They’re less-perishable, easily portable and can be eaten without utensils or a seat.

Roughly 4 million Ukrainians had already fled their country before Garramone and McGrattan arrived, then a new surge began.

They sat one night and watched the arrival of the people they’d been helping to feed.

“There were people who had been on the train for three days or on the bus for a week,” McGrattan said.

“I wasn’t sure my heart was going to be strong enough to see what I was going to see,” she said. “You feel a little bit of hope because of all the people working at the border.”

“They did their best to create an atmosphere that would create a sense of comfort,” Garramone said. “There were so many needs at the border that people here have no idea need to be met.”

McGrattan said it was clear that trouble was present just over the border: Military vehicles were present along the roads in Poland and there were helicopters overhead. But there was never a threat to them from the war.

There was another threat lurking, though: COVID-19.

“As someone who works in a hospital I knew I was going into a high COVID area,” McGrattan said. “We were testing all the time.”

On the return journey April 10, during a layover in Italy, she tested positive.

McGrattan isolated herself near Bologna for 10 days and spent time thinking about what she’d seen.

“I had a mild case, and if I had to do it all again I would,” she said. “I really feel like my work is halfway done — now I’ve got to tell people this is an accessible war, there are ways you can help.”