FONDA — All season long, the Fonda-Fultonville baseball team has had no trouble scoring runs.

The Braves’ offense powered them to another win Thursday, piling up 13 hits in a 15-3 non-league win that was halted by the 10-run rule after five innings.

“Overall, I think we played pretty well in all phases today,” Fonda-Fultonville coach Rick Palumbo said. “Our pitching, hitting and defense were all pretty good.”

Fonda-Fultonville scored 10 or more runs for the sixth time in 11 games this season, getting hits from eight different players. 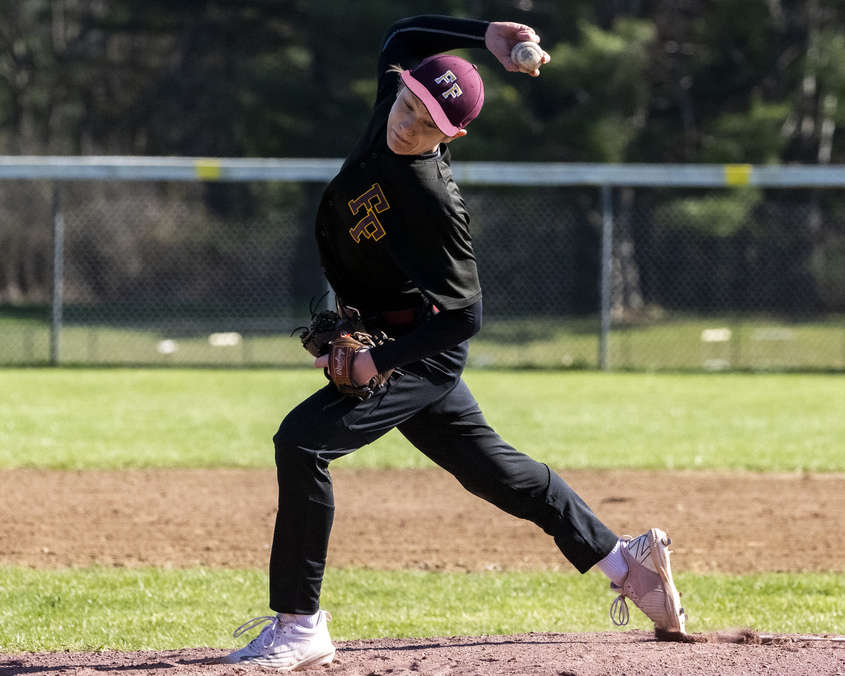 In addition to a big offensive day, the Braves also got a combined two-hitter from Joe Susi, Jackson Cusack and Brayden Monk.

Susi started the game by walking the first two batters he faced on eight straight pitches as Voorheesville scored all three of its runs in the first inning.

“Joey got off a tough start, but to his credit, he stuck with it and did a nice job for us,” Palumbo said.

It was Cusack’s first stint on the mound this season and Monk’s second of the season.

Romansky also had a third-inning double for the Blackbirds’ only other hit of the game.

“Unfortunately, baseball’s not a three-out game,” Turski said. “We got off to a good start, but that was about it today.”

After putting four runners on base in the first, the Blackbirds had just four base runners over the final four innings.

While the Voorheesville offense went silent after the top of the first, Fonda-Fultonville’s put up four runs in the first, five in the second, four in the third and two in the fourth.

“We had some good, timely hits today,” Palumbo said.

Myles had a two-run double in the first for the Braves, while Hernigle had an RBI double and Daus added an RBI single as Fonda-Fultonville took a 4-3 lead into the second.

After putting the Blackbirds down in order in the top of the second, the Braves scored five more runs in the bottom of the second.

Duval delivered a two-run double in the third and Fonda-Fultonville benefited from three errors to score four runs to extend their lead to 13-3.

Daus plated the final two runs with a two-run triple in the fourth to make it 15-3.

The Braves closed out the game by keeping Voorheesville off the board in the top of the fifth to end the game via the 10-run rule.

“I wasn’t expecting to run-rule them,” Palumbo said. “I think that’s a pretty good team we just beat.”

It was the fifth win over a Class B school this season for Fonda-Fultonville, which is looking for its first sectional title since winning the Class BB crown in 2014.

The unbeaten Braves have wins this season over defending Class B champion Broadalbin-Perth, Cobleskill-Richmondville and Voorheesville. Fonda-Fultonville also posted a pair of Class B non-league wins over Saratoga Catholic and Schuylerville to win the Phil Waring Memorial Tournament at Saratoga Catholic last Saturday. Fonda-Fultonville also played Johnstown earlier this season in a game that was suspended by weather with the score tied 7-7.

“Our non-league schedule has been good,” Palumbo said. “It gives us a little bit of credence going into the sectional meeting.”

The game also was the fifth in six days for the Braves, who are in a stretch of six game in seven days.

Fonda-Fultonville also will play four more games next week, hosting Fort Plain on Monday, traveling to Galway on Wednesday, hosting Canajoharie next Thursday before closing out the week with a non-league game at Broadalbin-Perth next Saturday.

“We’re playing four games this week and four more next week,” Palumbo said. “Our next few games are going to be the key to our season.”

Fonda-Fultonville (11-0 overall) is scheduled to host Duanesburg Friday at 4:30 p.m.

“These are high school kids and they’ve all got something going on,” Turski said. “I could make excuses, but I’m not going to. We just didn’t show up to play today. It was a very uncharacteristic performance by this group.”

“We’re back at it tomorrow, and there are no easy games in the Colonial Council,” Turski said.

More: All Sports | Everything Montgomery County