TOWN OF JOHNSTOWN — Nearly 300 people either sitting in lawn chairs or standing listened to officials discuss the state’s new concealed carry laws outside on the grounds of the Pine Tree Rifle Club Monday evening.

“This is a law that was not researched,” Smith said.

Smith said sheriffs, just like on bail reform, were not consulted before the laws were drafted.

At one point, Smith asked those attending the meeting whether they had a gun with them. Eighty to 90% of the people in attendance raised their hands. Later, when Giardino spoke, he asked whether people had a permit and all but a few in the crowd raised their hands.

When Giardino asked if people felt safe knowing how many people were carrying guns at the meeting, a resounding chorus of “yes” came from the crowd.

Among the provisions of the new law is a list of places where people are prohibited from carrying a concealed weapon, including polling places, schools and places of religious practice.

“If you read through them, you’re not going to be able to carry anywhere,” Smullen said. 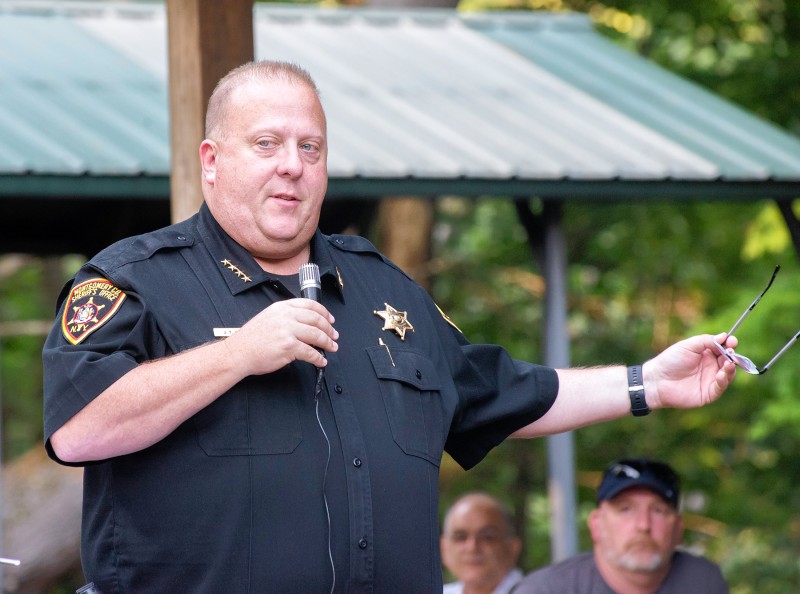 Montgomery County Sheriff Jeff Smith talks to the crowd assembled at the Pine Tree Rifle Club in Johnstown about upcoming changes in the state’e concealed carry laws on Monday, July 25, 2022.

“If you take that safety course now, you will still have to take the 16-hour required course again during your recertification process within the next year as written in the law,” Smith said.

He said once you take the 16-hour course, it’s his understanding that you won’t have to take it again.

Giardino said the state has not indicated how the courses will be run after Sept. 1.

In anticipation of the changes being made to the required safety course, the Pine Tree Rifle Club recently posted to its Facebook page that it will be offering an additional safety course during the month of August.

“We are trying our best to take care of you, we understand that you want to get in before the September deadline,” the post states. “Understand we have been doing this for the past 10 years and up to now the classes have been relatively small.”

Other parts of the new law require the applicant to meet with a judge, something that is not required now, Smith said. He said people would also be required to provide the usernames to their social media accounts for the past three years.

“Although it doesn’t tell us to give us access to those accounts, I don’t really know why they’d want us to have the accounts,” Smith said.

People would also need to prove they have good morals by providing four character references.

“These things are over and above of what’s in place now,” he said.

Giardino laid out some statistics for people during the meeting:

Giardino said lawsuits have already been filed against the recently passed concealed carry laws. One of them was filed by Gun Owners of America (GOA) on behalf of a Schenectady County resident who is a member of the group in the Northern District of New York.

“Instead of acknowledging the clear line in the sand drawn by the U.S. Supreme Court, Governor Hochul and the radical anti-gunners in Albany are doubling down on nearly every front to restrict the rights of their citizens to carry arms for self-defense,” said Erich Pratt, the group’s senior vice president in a press release. “Especially when crime is on the rise in places like New York City, GOA stands ready to fight for Americans’ right to defend themselves in public when danger rises.”

“I’m very confident that at least half of the laws are going to be struck down,” Giardino said.

Smullen said he plans to get involved in overturning the the laws as well.

“We’re going to do our very best to make sure it gets overturned as swiftly as possible,” he said.

During the meeting, Pine Tree Rifle Club President Paul Catucci said he had voter registration forms on hand for people to fill out and would even deliver them himself.

“Vote these people out of office,” he said.

Bleeker resident and club firearm instructor Charles Manell said he believes some of the laws should be grandfathered in. Manell said he’s been a gun owner since 1971 and trains people on how to use them safely, so there’s no reason he should need to take the 16-hour class upon recertification. He also said retired military or police officers shouldn’t have to take the new 16-hour course either.

Manell’s friend and Charleton resident Ron Carbonneall said while he doesn’t have a permit yet, he’s been thinking about getting one.

“It’s getting harder to apply now with all the hoops you have to jump through,” he said.

Gloversville boys’ basketball has sights set on another successful season