JOHNSTOWN – Watching the Johnstown Harvest Festival’s costume parade through downtown Saturday reminded Jessica Henry McClements why the annual event is worth all of the effort it takes to organize it.

“I see the kids walking down the street in the parade, in all of their costumes, and I’m almost brought to tears by it because I’m so happy to see all of this,” she said.

McClements, the owner of McLemon’s women’s clothing boutique store, is the chairwoman of the Downtown Johnstown Business & Professional Association, which organizes the annual Harvest Festival, an event that puts the city of Johnstown’s downtown area on display with Halloween and fall themed decorations, food, trick or treating at participating businesses, live music from Gary VanSlyke and family oriented games and activities.

“This event is good for our community, and it brings people downtown, and because it’s right before holiday season starts, it’s a great way to get people down here and remind them that we exist, these little small businesses are here,” she said. “The city of Johnstown is very special and has a lot to offer to people who visit us,” she said. “We’re a town that’s been shrinking for years and years and years, for decades we’ve been shrinking. Look at what’s happened with (the closing of two of the city’s elementary) schools. How are we going to fix that? Tourism is one of those things.”

For a business like McLemon’s, which sells retro and alternative style clothing from brands like Voodoo Vixen and Unique Vintage, the Johnstown Harvest Festival offers the chance for new customers to discover opportunities to buy items they might normally only buy online, with the benefit of a changing room.

“You can come to little Johnstown and actually shop for this stuff in person, because people need to be able to try stuff on,” McClements said. 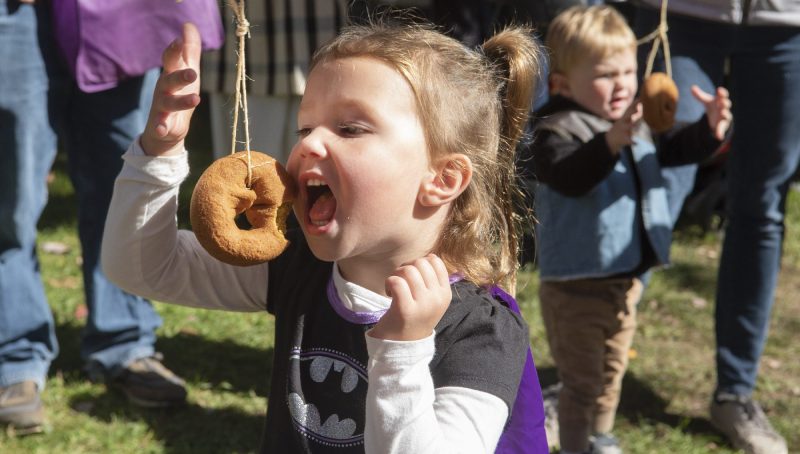 Harper Nieminski, 4, of Esperence is determined to take another bite of a apple cider donut without using her hands at the Donuts-On-A-String game at the Downtown Johnstown Business & Professional Association and Visit Fulton County, NY kids costume parade and annual harvest festival in Johnstown, Saturday.

This year’s edition of the Harvest Festival was assisted by the recently revitalized City of Johnstown Committee for Tourism and Special Events, which helped to supply more volunteers for activities, as well as city fire trucks, which were on display on the street in downtown, and tourism committee member Gary Locatelli, who reprised his longtime role as DJ “Uncle Vito” from his 30-year-career as a radio host for Albany’s PYX 106.

Locatelli played music for the downtown area using the portable speaker system that he used during the days when he would DJ live events, something he said he rarely does anymore, but was happy to do to help promote the Johnstown event after Mayor Amy Praught encouraged him to join the city’s tourism committee.

“This tourism committee is trying to help with the event, and we’re probably going to do some things of our own,” Locatelli said. “I’m basically like a promotion director. I’m in charge of promoting it, and I got it on the TV news, and things like that. I like to give back to the community, and I felt like I had something to offer for this.”

Linda Joseph, the owner of the Vintage Cafe for the last 14 years, said this year’s harvest festival offered her a chance to put some of the items she offers at the cafe on display with a table outside her business, including chili, corn chowder, pumpkin pie, apple pie, jumbo chocolate cookies made with molasses and cloves with sugar icing, and thumbprint cookies.

“This is the first time I’ve done that,” Joseph said of her harvest festival display table. “Now I sell baked goods, along with our usual. That started during the pandemic because what would happen is we would do takeout, and people would pick up their food, and I put up a table with goodies on it, and people would buy it.”

Johnstown native Erin Kelly was one of the many parents who took advantage of the festival, bringing her 9-year-old son Charlie Sinner out for the parade and candy-gathering opportunities. Charlie dressed as a grim reaper character, with a scythe and a mask that included light-up eyes.

“I hit a couple of spots and got candy, and raisins at Vishnu Music,” he said.

Kelly said her son attends weekly guitar lessons at downtown store Vishnu Music & Varieties, which is how she knew about the harvest festival.

“I’m from Johnstown, and it’s nice that they do this for the kids,” she said.

The costume parade started at city hall at noon on Saturday and traveled from 33-45 East Main Street to Sir William Johnson Park on West Main Street, where free refreshments were provided by the Johnstown Lions Club.

Lions Club President Linda Kollar said her organization gave away 250 hot dogs and at least four gallons of apple cider, as well as candy and popcorn.

“We ran out of hot dogs,” Kollar said. “It was a great event, and a beautiful day. There were a lot of kids, a lot of families.”

Kollar said the festival is one of the “give back” events for the Lions, which recently donated $2,500 to backpack programs in both the Gloversville and Johnstown school districts. She said they will also be donating money toward the Festival of Hope annual Thanksgiving meal event.

The bandshell at Sir William Johnson Park was decorated with hay bales, corn stalks and pumpkins by the Rizzo Farm, a 125-acre farm located near Fulton-Montgomery Community College.

Kelly Rizzo said this year was the first time her business has participated in the festival. She said the event offered an opportunity to show the public the vegetable items the Rizzo Farm sells at its produce stand.

“We’ve been growing hay for a long time, the vegetables and the pumpkins and everything has only been the last three years, something our family wanted to do,” she said. “We’ve got carving pumpkins, decorative pumpkins, gourds, white pumpkins, which are called blancos. People also like the yellow ones, which are called mellow yellows. We’re selling everything.”

Kelly Rizzo was assisted by her children Alee Rizzo, 10 and Gianna Rizzo, 16. Alee ran the pumpkin stand while wearing a “skeleton doll” costume.

Kelly’s brother-in-law Tim Rizzo, who also serves as a Johnstown Town Board member, helped his family with its farm stand in the park and distributed flyers for his “Upstate Ice Plex Inc.” concept.

Tim recently made a public presentation at the Fulton County Center for Regional Growth about the proposed approximately $35 million winter sports complex concept, which, if the funding can be obtained to build it, would include three ice rinks for ice hockey, skating and curling, as well as a daycare center, fitness center and an emergency services building.

Tim said events like the festival present opportunities to spread the word about his nonprofit concept, which can lead to more people joining his effort — like Amsterdam-based, former semi-pro ice hockey player Bill Baaki and Jennifer Tatlock, who coaches team figure skating and blind figure skating in Albany, both of whom recently expressed interest in joining the Upstate Ice Plex board of directors.

“So there are people here locally who are talented coaches for winter sports who are highly interested in the concept,” Tim said.

Gloversville boys’ basketball has sights set on another successful season