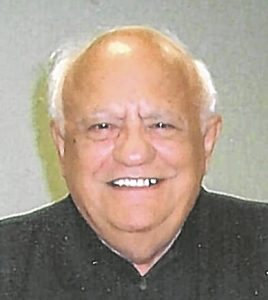 Antimo “Memo” Gazzillo, 93 of Gloversville, born
April 30, 1928 passed away peacefully in the company
of family Saturday October 9, 2021. Memo was the son
of the late Francis, and Rosalie (Maas) Gazzillo. He
was born in Caserta Italy and moved to Gloversville
as a young boy. He became a long-time resident of the
city and worked since childhood at Bowman’s Market.
He started out sorting potatoes, sweeping floors many
tasks before becoming a butcher at the store. He was
known to be the man behind the Italian sausage and
enjoyed his work at the store. Even after his retirement
he still worked part time to help out. Memo was
also a member of the Knights of Columbus since 1961
to the time of his death.
Memo enjoyed spending time with family and
friends, he thoroughly enjoyed his summer vacations
to New Jersey’s Belmar beach with his family, long
Sunday drives, the Giants football, he loved his pool
and swimming, snowmobiling, cooking out, boating,
and most of all playing poker at the Johnstown and
Gloversville senior centers, of which he belonged to
both.
He met and married the love of his life, Helen Marie
Savern and enjoyed a lifelong marriage beginning
on September 2, 1951 for 65 years. Together they had
three children that were his pride and joy. Memo is
survived by his son Frank Gazzillo (Colleen), and
daughters Anita Herr, And Marylouise Jones (Vincent)
his sister Ann Ambrosino, as well as 7 grandkids
Brian Jones (Tracey), Amy Jones (Kyle), Steven Herr
(Fahren), Thomas Herr, Dr. Antimo P. Gazzillo (Jenna),
Brian Denton (Erin), Michael Denton (Karly),
and 8 great grandkids.
Memo was predeceased by his loving wife Helen,
she passed in December 2016, brother Ralph Gazzillo,
sister Louise Liscio, son in law David Herr.
The family will receive relatives and friends from
4 to 7 pm Thursday, October 14 at Walrath & Stewart
Funeral Home, 51 Fremont Street, Gloversville. Facial
masks will be required. A Prayer Service will take
place 9:15 am Friday at the funeral home, followed by
a Mass of Christian Burial at 10 am at the Church of
the Holy Spirit, 151 S. Main St; with the Rev. Donald
Czelusniak officiating.
Interment will follow at Mount Carmel Cemetery,
Johnstown.
Memorial contributions may be made in lieu of flowers
to the St. Jude Children’s Research Hospital,501 St.
Jude Place, Memphis, TN 38105 or (www.stjude.org),
Boys Town, 294 W. Exchange St; Providence, RI 02903.
Online condolences to the family may be made at
www.brbsfuneral.com.
51 Fremont St., Gloversville
725-1121

Back taxes stymie sale of ‘Getman Home‘ in Gloversville