After winning the Section II Class D championship last spring, the Johnstown boys’ lacrosse team knew it would be facing several challenges as it looked to defend its title.

Among them were replacing six seniors who were key contributors to the title run as well as the unique challenge of changing leagues.

“It’s really not big of a deal for us. We have always played [pre-pandemic] non-league games against the Foothills teams. On our schedule in the past has been Schuylerville, Scotia/Glenville, Amsterdam and we would scrimmage Glens Falls as well as Queensbury,” Johnstown boys’ lacrosse coach Scott Petrie said. “Overall, the adjustment has been seamless.” 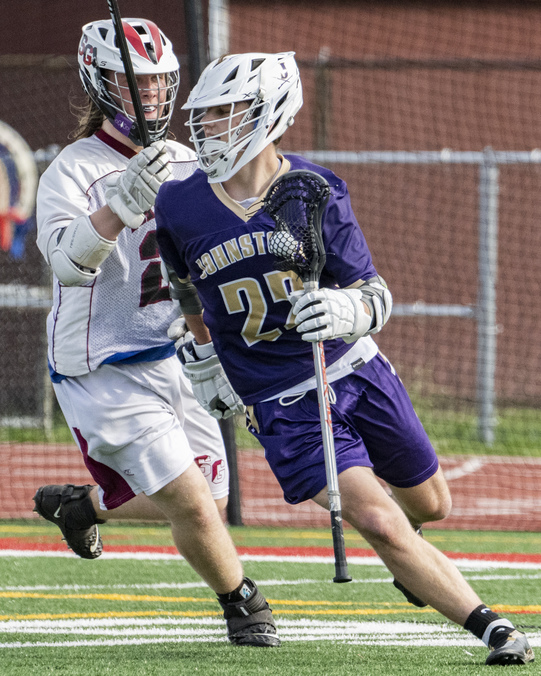 Through Thursday’s game at Scotia-Glenville, the Sir Bills are 4-6 overall and 3-5 in Foothills Council play. Two of those games were one-goal losses this week to Glens Falls (8-7) and Scotia-Glenville (9-8 in overtime).

“Yes, I believe it will definitely help us, and I enjoy playing in this league. But I would never diminish another league’s competition level. I would say strength of leagues fluctuates year-in and year-out,” Petrie said. “For example, when we were in the Wasaren pre-pandemic, we had some strong teams in that league. I remember a year when Cambridge beat South Glens Falls, Greenwich beat Glens Falls and Schuylerville, We [Johnstown] beat Scotia-Glenville and Amsterdam all in the same year. I also believe the league we were in had won four out of the last six championships for small schools. So the key is how you develop your teams.

“Don’t get me wrong, the Foothills certainly has an overall stronger league, and we are clearly the smallest in that league. But it’s not the only competition or the only way to develop in town. It’s the development that helps your team the most.”

This week’s 9-8 home loss to Glens Falls illustrated how the Sir Bills have progressed this season. When the teams met April 7 at Glens Falls, the Indians posted a 16-8 victory.

“Our captains [Ethan Petrie, Bryce Mureness, and Ryan Hoyt] have been doing a great job leading this team. We have been moving some pieces around to get the right fit and it seems to be coming together,” coach Petrie said. “We are winning games and are growing along the way. A good example is the first time we played Glens Falls we lost 16-8, and the second time we lost 9-8 we are slowly closing the gap.”

The move back to the Foothills also provided Johnstown with a pair of opportunities to face Schuylerville, which it has faced in the last two trips to the Class D championship game.

Johnstown won the title last season with a 10-9 win over the Black Horses at Schuylerville, which won both of this year’s regular-season meetings

After reaching the Class D title game in 2019 and winning the title in 2021 after the 2020 season was canceled due to the COVID pandemic, the Sir Bills are looking to make their third straight trip to the championship game.

“One of our goals this season is to make it back into the sectional championship,” coach Petrie said.

The Sir Bills faced Schuylerville from the Foothills Council in the Class D title game last spring and posted a 10-9 overtime victory over the Black Horses to earn their first sectional title since claiming the 2008 Class C crown. It was after the 2009 season that Johnstown asked to leave the Foothills Council in an effort to put its program on more solid footing after struggling on the field.

The Sir Bills moved to the Wasaren League for the 2010 season.

“There are different ways to develop. If you’re winning in a league with schools larger than you, you more than likely will have less student athletes walking away from your sport and more student-athletes developing their crafts in the offseason,” coach Petrie said. “In a small school like us, that’s important. In addition, if you’re playing in a league more suited for your strength, student-athletes will more than likely not lose interest. So in a small school like us, unlike the majority of the Foothills teams, if you have gap years where you need a couple years to develop a team, you better hope you aren’t getting demoralized in games or you will lose those developmental years and student-athletes, which are key to team success.”

With a team that features plenty of youth, the season has been full of learning experiences for the Sir Bills.

“There are so many underclassmen that are growing right now it’s really hard to say. But a few that have stood out are Vincent Ecker in goal is seeing the ball very well,” coach Petrie said. “Brandon Frank as a defenseman is doing a great job with our slide packages and team defense, and Andrew Lake as a midfielder has developed into a great groundball and clearing midfielder.”

Johnstown’s offense has been led this season by Ryan Hoyt and Matt Wheelis. Hoyt had five goals and an assist in Thursday’s overtime loss at Scotia-Glenville, while Wheelis scored twice.

“We have some talented players playing for us and it’s great to watch,” coach Petrie said. “I think our biggest improvement to date has been out team offense. At the beginning of the season, we were forcing the ball and not taking care of the ball. The last few games we have seen ball control. We are letting the offense come to us.”

Petrie said that even though his team is relatively young this season, they have shown plenty of grit.

“Although we are small and young this year, we are definitely grinders. We are a scrappy team,” coach Petrie said. “This team doesn’t quit. We are definitely trying to focus on each player doing their job on the field as well as making yourself better every day.”

Prior to this season, that was the number of victories for the Amsterdam/Broadalbin-Perth girls lacrosse team against its area rival Johnstown.

After Tuesday’s game at Knox Field, that number now stands at 2.

Prior to this season, Amsterdam/Broadalbin-Perth, which played its first varsity season in 2017, was 0-8 against Johnstown.

Heading into the final full week of the regular season, Mayfield and Johnstown will meet in baseball and softball under the lights at Johnstown High School.

The Sir Bills also will face Broadalbin-Perth in their final two Foothills Council games next week. Johnstown is set to travel to B-P on Tuesday before hosting the Patriots on Thursday.

Mayfield also has games with Fort Plain and Northville scheduled for next week. The Panthers are slated to travel to Fort Plain on Monday before face Northville on Thursday at Doubleday Field in Cooperstown.

The Johnstown softball team also has a non-league home game with Schoharie at 4 p.m. on Thursday. The Lady Bills also have Foothills Council home games with Scotia-Glenville (Monday) and Queensbury (Friday) scheduled.

In addition to its game with Johnstown, the Mayfield softball team will host Fonda-Fultonville in its Western Athletic Conference finale on Friday.